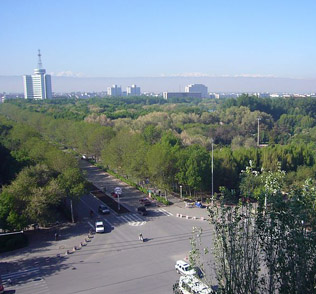 Shihezi is located at the northern foothills of the middle part of the Tian Shan range approximately 136 kilometres (85 mi) from the regional capital of Ürümqi. 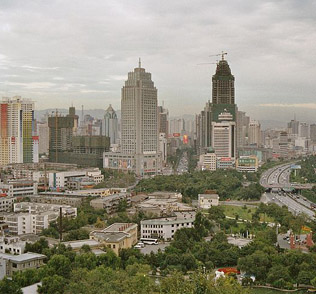 Ürümqi (/uːˈruːmtʃi/, literally "beautiful pasture", from Mongolian), is the capital of Xinjiang Uyghur Autonomous Region of the People's Republic of China in the northwest of the country. Urumqi was a major hub on the Silk Road during China's Tang dynasty, and developed its reputation as a leading cultural and commercial center during the Qing dynasty.

With a built-up (or metro) population of 2,988,715 as of 2010 census (6 urban and suburban districts but Dabancheng not yet urbanized) and 3.03 million in 7 urban and suburban districts, Ürümqi is the largest city in China's western interior. Since the 1990s Ürümqi has developed economically and now serves as a regional transport node, cultural, and commercial centre.

Xinjiang (Uyghur: شىنجاڭ‎, ULY: Shinjang; Mandarin pronunciation: [ɕíntɕjɑ́ŋ]; Chinese: 新疆; pinyin: Xīnjiāng), officially Xinjiang Uyghur Autonomous Region, is an autonomous region of China in the northwest of the country. It is the largest Chinese administrative division, the 8th largest country subdivision in the world, spanning over 1.6 million km2 and the most populous amongst the ten largest national subdivisions. It contains the disputed territory of Aksai Chin administered by China. Xinjiang borders Russia, Mongolia, Kazakhstan, Kyrgyzstan, Tajikistan, Afghanistan, Pakistan and India. It is also bordered, to the south, by Tibet, easily its longest border, when including the Eastern Tibetan disputed territories. It has abundant oil reserves and is China's largest natural gas-producing region. It is home to a number of ethnic groups including the Uyghur, Han, Kazakhs, Tajiks, Hui, Kyrgyz, and Mongols. More than a dozen autonomous prefectures and counties for minorities are in Xinjiang. Older English-language reference works often refer to the area as Chinese Turkestan. Xinjiang is divided into the Dzungarian Basin in the north and the Tarim Basin in the south by a mountain range. Only about 4.3% of Xinjiang's land area is fit for human habitation. With a documented history of at least 2,500 years, a succession of peoples and empires has vied for control over all or parts of this territory. Before the 21st century, all or part of the region has been ruled or controlled by the Tocharians, Yuezhi, Xiongnu Empire, Xianbei state, Kushan Empire, Rouran Khaganate, Han Empire, Former Liang, Former Qin, Later Liang, Western Liáng, Tang Dynasty, Tibetan Empire, Uyghur Khaganate, Kara-Khitan Khanate, Mongol Empire, Yuan Dynasty, Chagatai Khanate, Moghulistan, Qara Del, Northern Yuan, Yarkent Khanate, Dzungar Khanate, Qing Dynasty, the Republic of China and, since 1950, the People's Republic of China.