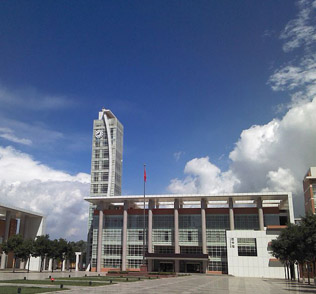 Yinchuan is the capital of the Ningxia Hui Autonomous Region, People's Republic of China, and former capital of the Western Xia Empire of the Tanguts. It has an area of 4,467 km (2,776 mi) and a total population of 1.99 million. Its built up area is home to 1,290,170 inhabitants spread on 3 urban districts. The name of the city literally means "silver river"; the character for "river" (Chinese: 川; pinyin: chuān) is the same as that in Sichuan, but not as those in, for example, the Yellow River (simplified Chinese: 黄河; traditional Chinese: 黃河; pinyin: Huánghé) or Yangtze River (simplified Chinese: 长江; traditional Chinese: 長江; pinyin: Chángjiāng).

Ningxia (Chinese: 宁夏; pinyin: Níngxià; Wade–Giles: Ning-hsia; pronounced [nǐŋɕjâ]), officially the Ningxia Hui Autonomous Region (NHAR), is an autonomous region of the People's Republic of China located in the northwest part of the country. Formerly a province, Ningxia was incorporated into Gansu in 1954 but was separated from Gansu in 1958 and was reconstituted as an autonomous region for the Hui people, one of the 56 officially recognised nationalities of China. Ningxia is bounded by Shaanxi to the east, Gansu to the south and west, and Inner Mongolia Autonomous Region to the north and has an area of around 66,400 square kilometres (25,600 sq mi). This sparsely settled, mostly desert region lies partially on the Loess Plateau and in the vast plain of the Yellow River, and features the Great Wall of China along its northeastern boundary. Over the years an extensive system of canals has been built. Extensive land reclamation and irrigation projects have made increased cultivation possible.