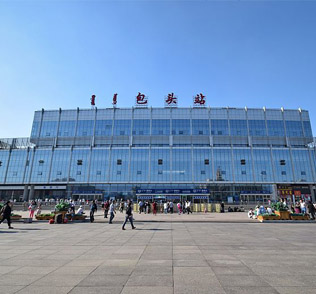 Baotou (Mongolian: ᠪᠤᠭᠤᠲᠤ ᠬᠣᠲᠠ Buɣutu qota; Chinese: 包头市) also known as Bugthot is the largest industrial city in the Inner Mongolia Autonomous Region of the People's Republic of China. Governed as a prefecture-level city, its built-up (or metro) area made up of 5 urban districts is home to 2,070,801 inhabitants with a total population of over 2.65 million accounting for counties under its jurisdiction. The city's Mongolian name means "place with deer", and an alternate name is "Lucheng" (鹿城; Lùchéng), meaning "Deer City". 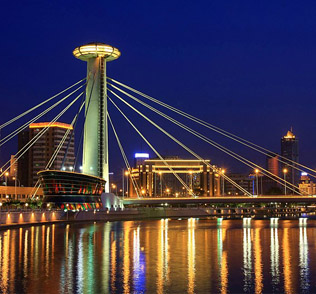 Chifeng (Chinese: 赤峰市), also known as Ulanhad (Mongolian: ᠤᠯᠠᠭᠠᠨᠬᠠᠳᠠ ᠬᠣᠲᠠ (Улаанхад хот) Ulaɣanqada qota [ʊlaːnxad xɔt], "red cliff"), is a prefecture-level city in southeastern Inner Mongolia, People's Republic of China. It borders Xilin Gol League to the north and west, Tongliao to the northeast, Chaoyang (Liaoning) to the southeast, and Chengde (Hebei) to the south. The city has a total administrative area of 90,275 square kilometres (34,855 sq mi) and has a population of 4,341,245 inhabitants. As of the 2010 census, 1,094,970 of these residents reside within in the urban districts of Hongshan, Yuanbaoshan and Songshan. However, a large part of Songshan is still rural and Yuanbaoshan is a de facto separate town 27 kilometers away from the core district of Chifeng. The city was the administrative centre of the defunct Ju Ud League (昭乌达盟; ᠵᠤᠤ ᠤᠳᠠ ᠴᠢᠭᠤᠯᠭᠠᠨ). 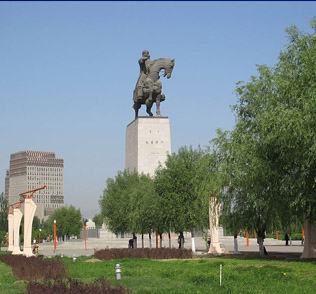 The name of the city in Mongolian means "Blue City"—Kuku-Khoto in Mongolian—although it is also wrongly referred to as the "Green City." The color blue in Mongol culture is associated with the sky, eternity and purity; in Chinese, the name can be translated as Qīng Chéng (Chinese: 青城), literally, "Blue/Green City." 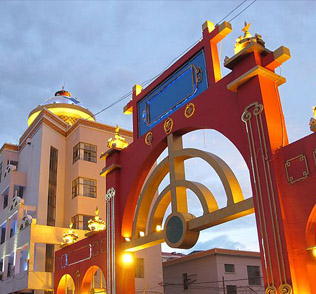 Hulunbuir or Hūlúnbèi'ěr (Mongolian: ᠬᠥᠯᠥᠨ ᠪᠤᠶᠢᠷ ᠬᠣᠲᠠ Kölön Buyir qota; Chinese: 呼伦贝尔市) is a region that is governed as a prefecture-level city in northeastern Inner Mongolia, in the People's Republic of China. Its administrative center is located at Hailar District, its largest urban area. Major scenic features are the high steppes of the Hulun Buir grasslands, the Hulun and Buir lakes (the latter partially in Mongolia), and the Khingan range. Hulun Buir borders Russia to the north and west, Mongolia to the south and west, Heilongjiang province to the east and Hinggan League to the direct south. Hulunbuir is a linguistically diverse area: next to Mandarin Chinese, Mongolian dialects such as Khorchin and Buryat, the Mongolic language Dagur and some Tungusic languages are spoken there. 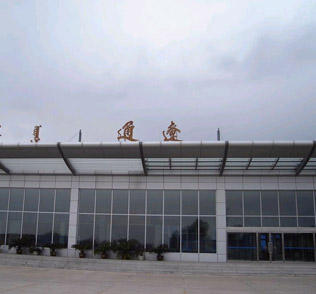 The original Mongolian name for Tongliao city proper (i.e. Horqin District) is Bayisingtu ('having buildings'), while the original name of the prefecture-level city is Jirem. The Mongolian dialect spoken in this area is Khorchin Mongolian.

Inner Mongolia ( Chinese: 内蒙古; pinyin: Nèi Měnggǔ), officially Inner Mongolia Autonomous Region or Nei Mongol Autonomous Region, is an autonomous region of the People's Republic of China, located in the north of the country, containing most of China's border with Mongolia (the rest of the China-Mongolia border is taken up by the Xinjang and Gansu provinces) and a small chunk of the border with Russia. Its capital is Hohhot, and other major cities include Baotou, Chifeng, and Ordos.