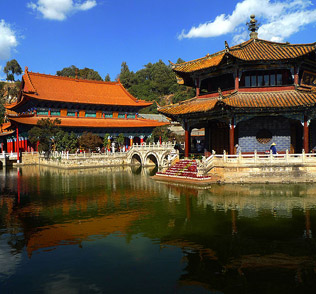 Kunming is the capital and largest city in Yunnan Province, Southwest China. Known as Yunnan-Fu (云南府, Yúnnánfǔ) until the 1920s, today it is a prefecture-level city and the political, economic, communications and cultural centre of the province as well as the seat of the provincial government. The city is also home to several universities, museums, galleries and other important economic, cultural, and educational institutions. The headquarters of many of Yunnan's large businesses are in Kunming as well. It was important during World War II as a Chinese military center, American air base, and transport terminus for the Burma Road. Located in the middle of the Yunnan–Guizhou Plateau, Kunming is located at an altitude of 1,900 metres (6,234 feet) above sea level and at a latitude just north of the Tropic of Cancer. It covers an area of 21,473 square kilometres (8,291 sq mi) and its urban area covers 2,622 square kilometres (1,012 sq mi). Kunming has population of 6,432,212, including 3,583,429 in the built-up area made up of 4 urban and 1 suburban districts, and is located at the northern edge of the large Lake Dian, surrounded by temples and lake-and-limestone hill landscapes. 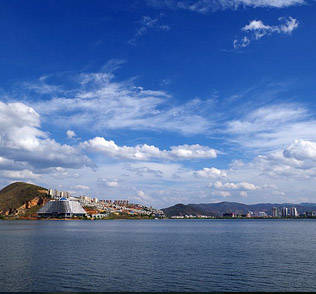 Dali City (Chinese: 大理市; pinyin: Dàlǐ shì; Bai: Darl•lit; Hani: Dafli) is a county-level city in and the seat of the Dali Bai Autonomous Prefecture, in northwestern Yunnan province, People's Republic of China. Dali is one of the most popular tourist destinations in Yunnan, known for its natural scenery and historical and cultural heritage. 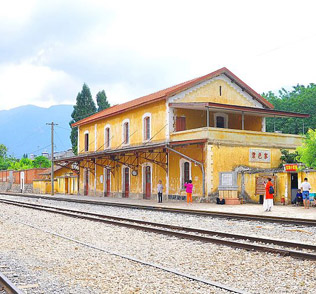 Mengzi (Chinese: 蒙自; pinyin: Měngzì; former French romanization: Mongtseu; Chinese Postal Map Romanisation spelling: Mengtsz) is a city in the southeast of Yunnan province, People's Republic of China. Administratively, it is a county-level city and the seat of the Honghe Hani and Yi Autonomous Prefecture, located about 175 kilometres (109 mi) south-southeast of the provincial capital of Kunming. It is situated in the centre of a fertile valley basin on a plateau 1,000 metres (3,300 ft) above sea level. Mengzi was formerly Mengzi County (蒙自县) until October 2010, when it was upgraded to a county-level city. 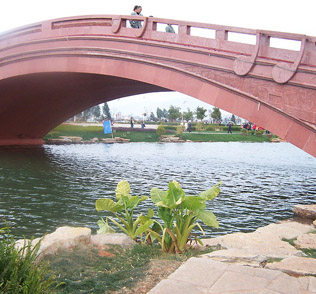 Yuxi (Chinese: 玉溪; pinyin: Yùxī) is a prefecture-level city in the Yunnan province of the People's Republic of China. The administrative center of Yuxi is Hongta District. Yuxi is approximately 90 kilometres (56 mi) south of Kunming.

"Yunnan is a province located in the far southwest of the China. It has a population of 45.7 million (2009), and the capital of the province is Kunming, formerly also known as Yunnan. Yunnan is situated in a mountainous area, most of the population lives in the eastern part of the province. In the west, the altitude varys from the mountain peaks to river valleys as much as 3,000 metres (9,800 ft). Yunnan is rich in natural resources and has the largest diversity of plant life in China. Yunnan's nominal GDP in 2011 was 875.1 billion yuan (US$138.92 billion), and it is one of the major production bases of copper, lead, zinc, tin and aluminum in China. Some popular universities in China contains Baoshan College of Chinese Medicine, Chuxiong Normal University and Dali University."