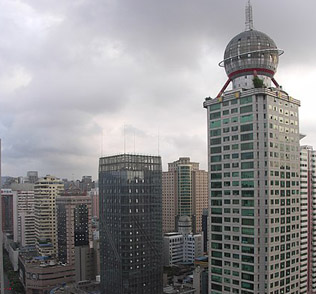 Guìyáng (Chinese: 贵阳) is the capital of Guizhou province of Southwest China. It is located in the centre of the province, situated on the east of the Yunnan–Guizhou Plateau, and on the north bank of the Nanming River, a branch of the Wu River. The city has an elevation of about 1,100 meters. It has an area of 8,034 square kilometres (3,102 sq mi). Its population is 4,324,561 at the 2010 census whom 3,037,159 live in the built up area made of 7 urban districts.

"Guizhou (simplified Chinese: 贵州; pinyin: Guìzhōu) is a province of China that located in the southwestern part of the country. The capital of it is Guiyang. As of the mid 19th century, Guizhou are known as a province that exports mercury, gold, iron and lead. Until now, Guizhou is also a relatively poor and economically undeveloped province, but Guizhou is rich in natural, cultural and environmental resources. Its nominal GDP for 2012 was 680.22 billion yuan (107.758 billion USD). The most popular university in Guizhou is Guizhou University."