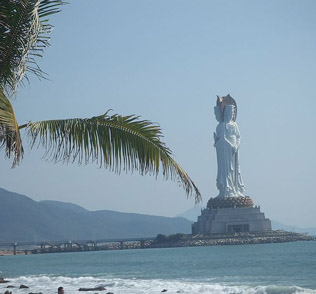 Sanya is the southernmost city on Hainan Island, and one of the three prefecture-level cities of Hainan Province, in Southeast China.
According to the 2010 Census, the population of Sanya is of 685,408 inhabitants,[1] living in an area of 1,919.58 square kilometres (741.15 sq mi). The city is renowned for its tropical climate and has emerged as a popular tourist destination, also serving as the training site of the Chinese national beach volleyball team. Sanya is home to small concentrations of Utsul people. 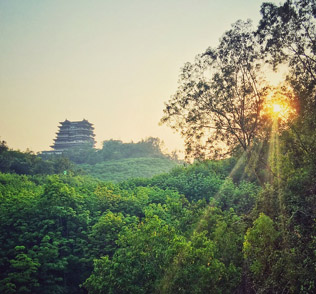 Dānzhōu (Chinese: 儋州) is a city in the northwest of the Chinese island province of Hainan. It is a county-level city administered directly by the province. Although called a "city", Danzhou refers to a large land area in Hainan - an area which was once a county. Within this area is the main city, Danzhou City. 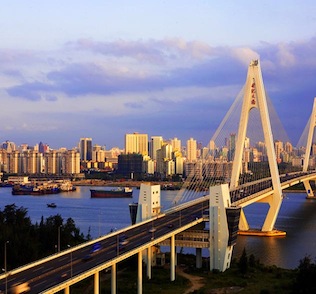 Hǎikǒu (Chinese: 海口), is the capital and most populous city of Hainan province, People's Republic of China. It is situated on the northern coast of Hainan, by the mouth of the Nandu River. The northern part of the city is the district of Haidian Island, which is separated from the main part of Haikou by the Haidian River, a branch of the Nandu.

Administratively, Haikou is a prefecture-level city, comprising four districts, and covering 2,280 square kilometres (880 sq mi). There are 2,046,189 inhabitants in the built up area all living within the 4 urban districts of the city.

Haikou was originally a port city. Today, more than half of the island's total trade still goes through its ports. The city is home to Hainan University, which has its main campus on Haidian Island.

"Hainan (Chinese: 海南; pinyin: Hǎinán) is the smallest and southernmost province of China. The name “海南” means south of the sea, it also refers to Hainan Island (海南岛, Hǎinán Dǎo), which is also the main island of the province. Hainan's economy is predominantly agricultural, and more than a half of the island's exports are agricultural products. Hainan has a reputation for being a ""Wild West"" area. Now, China’s central government has encouraged foreign investment in Hainan and has allowed the island to rely to a large extent on market forces. In 2011, Hainan’s nominal GDP was 251.5 billion yuan (US$39.9 billion), and made it the 4th smallest in all of the China and contributes just 0.53% to the entire country's economy. The great environment has made Hainan a popular choice for people who want to study in China. Some popular university in Hainan contains: Hainan University, South China Tropical Agricultural University, Chinese Academy of Tropical Agricultural Sciences and Hainan Normal University."