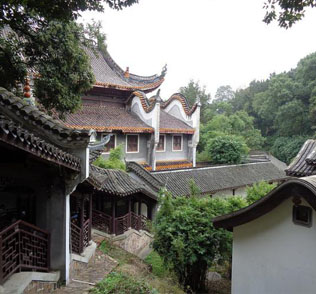 Changsha (simplified Chinese: 长沙; traditional Chinese: 長沙; pinyin: Chángshā) is the capital of Hunan Province in south-central China, located on the lower reaches of the Xiang River, a branch of the Yangtze River. Its municipality covers an area of 11,819 square kilometres (4,563 sq mi) and, according to the 2010 Census, a population of 7,044,118 inhabitants. The city's urban area has a population of 3,617,469.

Changsha was important from the time of the Qin dynasty (221–207 BC). In AD 750–1100 Changsha was a major commercial hub, and its population increased greatly. Under the Qing dynasty, from 1664, it was the capital of Hunan province, and it was a major rice market. It was besieged during the Taiping Rebellion but never fell. Changsha was the site of Mao Zedong's conversion to communism. It was the scene of major battles in the Sino-Japanese War of 1937–45 and was briefly occupied by the Japanese. Rebuilt since 1949, the city is now a major interior port and a commercial and industrial center. 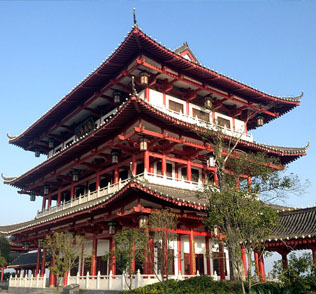 Changde (Chinese: 常德; pinyin: Chángdé) is a prefecture-level city in the northwest of Hunan province, People's Republic of China, with a population of 5,717,218 as of the 2010 census, of which 1,232,182 reside in the urban districts of Dingcheng and Wuling. In addition to the urban districts, Changde also administers the county-level city of Jinshi and six counties. Changde is adjacent to Dongting Lake to the east, the city of Yiyang to the south, Wuling and Xuefeng Mountains to the west, and Hubei province to the north.

The area has been inhabited by humans since around 8,000 years ago. In that time, the city has changed names several times, but it has been known as Changde since the twelfth century. The city is well known for the Battle of Changde during the Second Sino-Japanese War (1937–45) and the atrocities committed then by the Imperial Japanese Army. 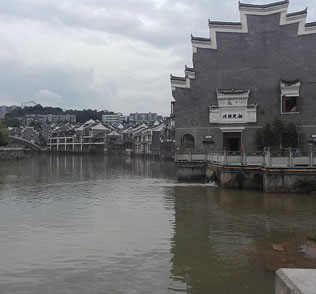 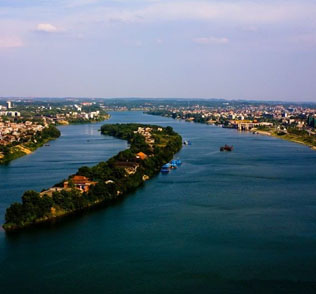 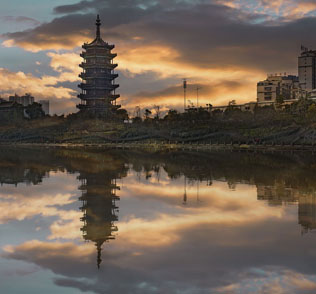 Huaihua lies is in the mountainous west of Hunan, south-east of Zhangjiajie National Forest Park, and shares the same mountain belt.

The area's rural poverty is a continuing problem.

Railroads provide the main transportation in the region, although an airport was opened in 2004.

Huaihua is home to the Second Artillery Corps Base 55, which is charged with maintaining ICBMs. The nuclear assets at Huaihua are intended for small-scale nuclear conflicts (with a limited, but nuclear, exchange), as well as the ability to strike Guam, one of only two B-2 bases. 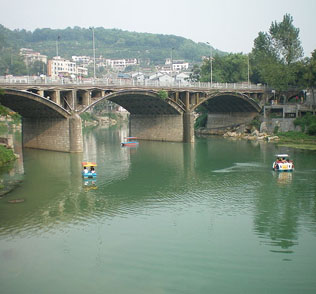 Jishou has a history of more than 2,000 years dating back to the Qin dynasty. In those days, it was affiliated with Qianzhong Prefecture (黔中郡). During the Song dynasty, a town government was established in a stockaded village, Zhenxi (镇溪寨; 鎮溪寨), which in the Ming dynasty became the Zhenxi soldiers and civilians battalion (镇溪军民千户所; 鎮溪軍民千戶所). Qianzhou Prefecture (乾州厅) was created during the Qing dynasty. During the Republic of China era it was known as Qian County (乾县; 乾縣) In 1953 the area was renamed Jishou county, with two adjacent cities, Jishou and Qianzhou. In 1982 Jishou city became the capital of Xiangxi Tujia and Miao Autonomous Prefecture. The city of Qianzhou (乾城) now lies just south of Jishou city. 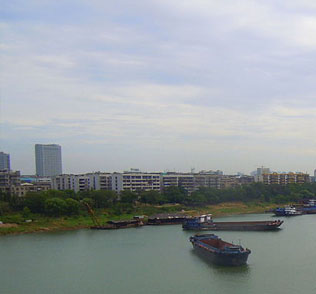 Xiangtan (Chinese: 湘潭; pinyin: Xiāngtán; Wade–Giles: Hsiang-tan) is a prefecture-level city in Hunan province, China, located on the lower reaches of Xiang River. The hometowns of several founding leaders of the Chinese Communist Party, including Mao Zedong, Liu Shaoqi, and Peng Dehuai, are in the Xiangtan prefecture, as well as the hometowns of Qing dynasty painter Qi Baishi and scholar-general Zeng Guofan.

As of 2010, it had 2,748,552 inhabitants, of whom 1,779,960 lived in the built-up area (2 urban districts plus Xiangtan county). Together with the four adjoining urban districts of Zhuzhou, its built-up area is home to 2,586,948 inhabitants. In 2007, the city is named China's top ten livable cities by Chinese Cities Brand Value Report, which was released at 2007 Beijing Summit of China Cities Forum. 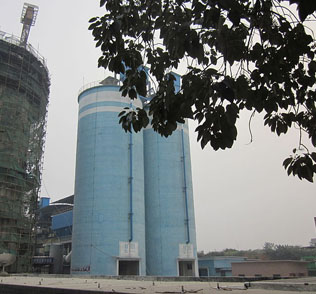 Yiyang (simplified Chinese: 益阳; traditional Chinese: 益陽; pinyin: Yìyáng) is a prefecture-level city at the Zi River in Hunan province, People's Republic of China, straddling Lake Dongting and bordering Hubei to the north. According to the 2010 Census, Yiyang has a population of 4,313,084 inhabitants residing in an area of 12,144 km2 (4,689 sq mi). The previous census was in 2000 when it was recorded there were 4,309,143 inhabitants. 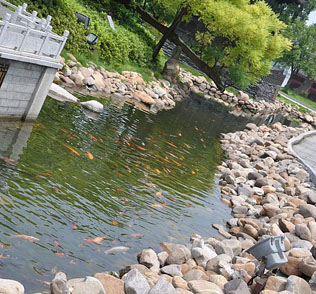 The city's most famous attraction is the Yueyang Tower. 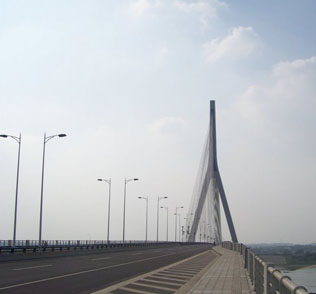 Zhuzhou (Chinese: 株洲; pinyin: Zhūzhōu), formerly Jianning, is a prefecture-level city of Hunan Province, People's Republic of China, a little to the southeast of Changsha and bordering Jiangxi to the east. It is part of the "ChangZhuTan Golden Triangle" (comprising the cities of Changsha, Zhuzhou and Xiangtan). The city has jurisdiction over 5 counties (Yanling, Chaling, Youxian, Liling, Zhuzhou) and four districts (Hetang, Lusong, Shifeng and Tianyuan, a high-tech industrial development zone), and covers an area of 11,420 km2 (4,410 sq mi).

It had 3,855,609 inhabitants as of the 2010 census, of whom 806,988 lived in the built-up area (4 urban districts). With areas adjoining Zhuzhou due to be agglomerated in a few years' time, the joint built-up area will be home to 2,586,948 inhabitants. Zhuzhou is located in a subtropical monsoon climate zone and with its abundant mineral and organic resources has one of the highest agricultural yields in Hunan Province.

"Hunan (Chinese: 湖南; pinyin: Húnán) is a province located in the south-central part of China. The name means “south of the lake”, the Lake Dongting. And it’s one word abbreviation is ""湘"". Before Qing dynasty, Hunan and Hubei was a part of the province of Huguang (湖廣). And after that, in 1664, Hunan province was created and renamed to its current name in 1723. Hunan’s nominal GDP for 2011 was 1.90 trillion yuan (US$300 billion). Hunan's traditional crops are rice and cotton, however, in recent years Hunan has grown to become an important center for steel, machinery and electronics production. Some top universities in Hunan are listed as below: Central South University Hunan University Yuelu Academy National University of Defense Technology"Hubei is officially abbreviated to ""鄂"" (È). Hubei's economy ranks 11th in China and its nominal GDP for 2011 was 1.959 trillion yuan (311 billion USD). It is said that the government of Hubei hopes to keep the GDP growth rate above 10% annually and double per capita GDP by 2020. Hubei has some famous universities like Huazhong University of Science and Technology, Wuhan University and Wuhan University of Technology."