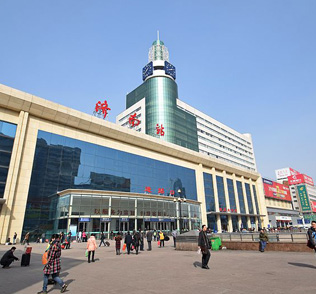 Jinan (Chinese: 济南市) is the capital of Shandong province in Eastern China. The area of present-day Jinan has played an important role in the history of the region from the earliest beginnings of civilization and has evolved into a major national administrative, economic, and transportation hub. The city has held sub-provincial administrative status since 1994. Jinan is often referred to as the 'Spring City' for its well-known 72 artesian springs inside urban area. Its population was 6,813,984 at the 2010 census whom 4,335,989 lived in the built-up (or metro) area made up of 6 urban districts. 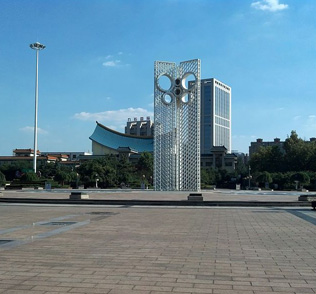 Weifang (simplified Chinese: 潍坊; traditional Chinese: 濰坊; pinyin: Wéifāng) is a prefecture-level city in central Shandong province, People's Republic of China. It borders Dongying to the northwest, Zibo to the west, Linyi to the southwest, Rizhao to the south, Qingdao to the east, and looks out to the Laizhou Bay to the north. Its population was 9,086,241 at the 2010 census whom 2,659,938 in the built-up (or metro) area made up of 4 urban districts (Kuiwen, Weicheng, Hanting and Fangzi) and Changle County largely being urbanized. 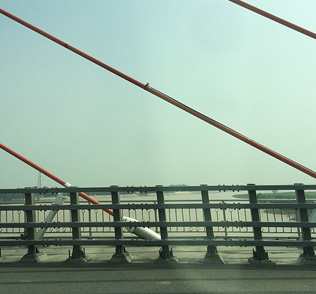 Binzhou (simplified Chinese: 滨州; traditional Chinese: 濱州; pinyin: Bīnzhōu; literally: "coastal prefecture") is a prefecture-level city in northern Shandong province, People's Republic of China. Sitting on the northern bank of the Yellow River with two arms extended to the southern bank, Binzhou borders the provincial capital of Jinan to the southwest, Dezhou to the west, Zibo to the south, Dongying to the east, and the province of Hebei to the north. The city also has a short coastline bordering the Bohai Bay.

Humans have been living in the area around Binzhou since the Neolithic era. It was called “Pugu country” in the Shang Dynasty, and was a county in the Qin Dynasty. It was first called Binzhou in era of the Five Dynasties because it borders the Bohai Sea. Nowadays, it has more than 3.7 million inhabitants. The major Industries are based on oil, chemicals and textiles. 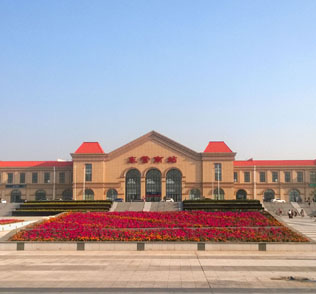 Dongying (simplified Chinese: 东营; traditional Chinese: 東營; pinyin: Dōngyíng), a prefecture-level city, lies on the northern (Bohai Sea) coast of Shandong province, People's Republic of China. At the 2010 census, 2,035,338 people resided within its administrative area of 7,923.26 km2 (3,059.19 sq mi) and 998,968 in the built-up area made up of Dongying district and Kenli County largely being urbanized. Dongying is home to the Shengli Oilfield, which is, after Daqing (Heilongjiang), the second largest oilfield nationally. 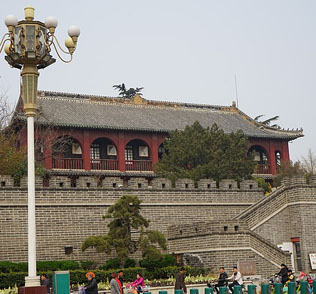 Jining (simplified Chinese: 济宁; traditional Chinese: 濟寧; pinyin: Jǐníng) is a prefecture-level city in southwestern Shandong province. It borders Heze to the southwest, Zaozhuang to the southeast, Tai'an to the northeast, and the provinces of Henan and Jiangsu to the northwest and south respectively. Jining, which is located right to the north of the Lake Nanyang (Chinese: 南阳湖; pinyin: Nányáng Hú), is today the northernmost city reachable by navigation on the Grand Canal of China. 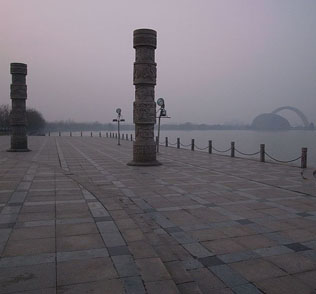 Liaocheng (Chinese: 聊城; pinyin: Liáochéng), also known as the Water City, is a prefecture-level city in western Shandong province, People's Republic of China. It borders the provincial capital of Jinan to the southeast, Dezhou to the northeast, Tai'an to the south, and the provinces of Hebei and Henan to the west. The Grand Canal flows through the city center. Its population was 5,789,863 at the 2010 census whom 1,229,768 lived in the built-up area made up of Donchangfu district, even though large parts remain rural.

During the Song dynasty, the area of present-day Liaocheng included the prefectures of Bozhou (博州) and Jizhou (濟州). In 2007, the city is named China's top ten livable cities by Chinese Cities Brand Value Report, which was released at 2007 Beijing Summit of China Cities Forum. 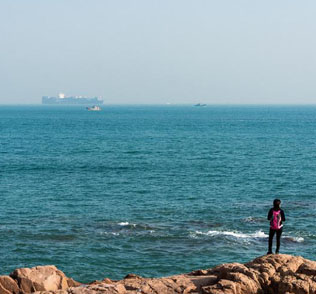 Qingdao (Chinese: 青岛; pinyin: About this sound Qīngdǎo (help·info); former German: Tsingtau; former official romanization: Tsingtao) is a major city in eastern Shandong Province, Eastern China. Administered at the sub-provincial level, Qingdao has jurisdiction over seven districts and five county-level cities. According to the 2010 census, the built-up (or metro) area made up of 6 urban districts and Jimo City had 5,764,384 inhabitants, while the total population of the sub-provincial city is up to 8.71 million. Lying across the Shandong Peninsula and looking out to the Yellow Sea, it borders Yantai to the northeast, Weifang to the west and Rizhao to the southwest. Qīng (青) in Chinese means "green" or "lush", while dǎo (岛) means "island".

Qingdao is a major seaport, naval base, and industrial centre. The world's longest sea bridge, the Jiaozhou Bay Bridge, links the main urban area of Qingdao with Huangdao district, straddling the Jiaozhou Bay sea areas. It is also the site of the Tsingtao Brewery, the second largest brewery in China. 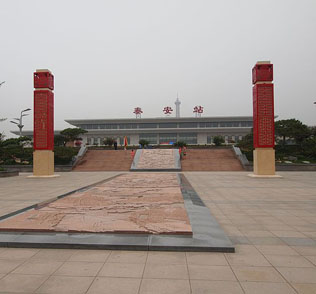 Tai'an (Chinese: 泰安; pinyin: Tài'ān) is a prefecture-level city in western Shandong province. Centered on Mount Tai, the city borders the provincial capital of Jinan to the north, Laiwu to the northeast, Zibo to the east, Linyi to the southeast, Liaocheng to the extreme west and Jining to the south. To the west, Tai'an is separated from the province of Henan by the Yellow River. 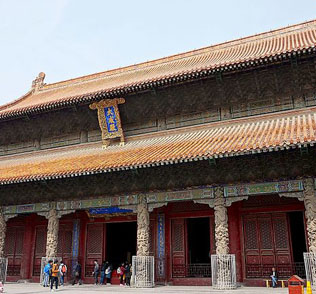 Qufu (Chinese: 曲阜; pinyin: Qūfù; Wade–Giles: Ch'ü1-fu4) is a city in the south-west of Shandong province, People's Republic of China. It is located at 35° 36′ northern latitude and 117° 02′ east, about 130 kilometres (81 mi) south of the provincial capital Jinan and 45 kilometres (28 mi) northeast of the prefecture seat at Jining. Qufu has an urban population of about 60,000, the entire administrative region has about 650,000 inhabitants. 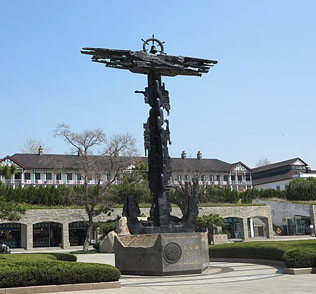 Weihai (Chinese: 威海; pinyin: Wēihǎi; English: Port Edward) is a city in eastern Shandong province, People's Republic of China. It is the easternmost prefecture-level city of the province and a major seaport. Weihai borders Yantai to the west and the Yellow Sea to the east.

The minor planet 207931 Weihai is named after this city. 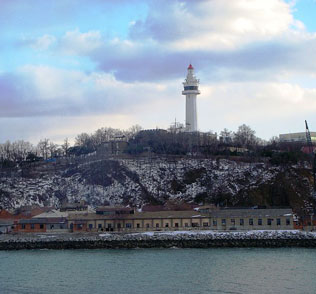 Yantai (Chinese: 烟台; pinyin: Yāntái), formerly known as Chefoo or Chih-fou, is a prefecture-level city in northeastern Shandong province, People's Republic of China. Located on the Bohai Strait and the southern coast of the Korea Bay, Yantai borders the cities of Qingdao and Weihai to the southwest and east respectively. It is the largest fishing seaport in Shandong. Its population was 6,968,202 at the 2010 census whom 2,227,733 lived in the built-up area made up of 4 urban districts (Zhifu, Muping, Fushan and Laishan).

The contemporary name of Yantai came from the watchtowers constructed on Mount Qi in 1398, during the reign of the Hongwu Emperor, founding emperor of the Ming Dynasty (yan—smoke; tai—tower). The towers served to raise alarms against invasions of Japanese pirates. 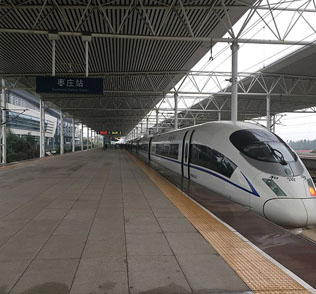 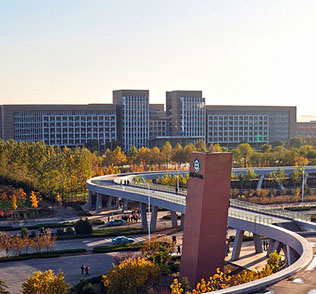 Zibo (Chinese: 淄博; pinyin: Zībó) is a prefecture-level city in central Shandong province, People's Republic of China. It borders the provincial capital of Jinan to the west, Laiwu and Tai'an to the southwest, Linyi to the south, Weifang to the east, Dongying to the northeast, and Binzhou the north.

Located in the centre of Shandong, Zibo is an important transportation hub. Zibo governs 5 districts (Zhangdian, Zichuan, Boshan, Zhoucun and Linzi) and each of these districts has a distinct downtown area of their own. The T-shaped city has a total area of 5,938 km2 (2,293 sq mi), including the counties of Huantai, Gaoqing, and Yiyuan. Zibo's total population was 4.53 million at the 2010 census, of which 3,633,239 inhabitants lived in the built-up area made of 5 urban districts (metro area) plus Huantai county largely being built. The built-up area is being conurbated with Zouping County in Binzhou municipality. Zibo was the centre of the ancient State of Qi, whose capital Linzi was the most populous city in the east about 3000 years ago. Zibo is the birthplace of ancient football Cuju, which according to FIFA, was the earliest form of the sport. Pu Songling, a well-known writer of the Qing Dynasty, is one of the most famous people from Zibo. As the birthplace of Qi Culture and because of the abundant natural resources, it is an excellent tourist city in China. 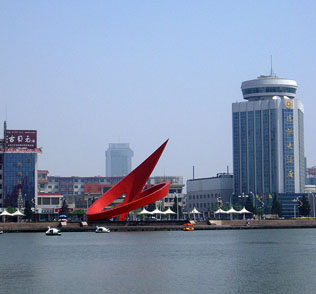 Dezhou (Chinese: 德州; pinyin: Dézhōu) is a prefecture-level city in northwestern Shandong province, People's Republic of China. It borders the provincial capital of Jinan to the southeast, Liaocheng to the southwest, Binzhou to the northeast, and the province of Hebei to the north.

"Shandong (simplified Chinese: 山东; pinyin: Shāndōng), is a coastal province of China, and it is part of the East China region. Shandong has played a major role in Chinese history, the Mount Tai in Shandong is the most revered mountain of Taoism and one of the world's sites with the longest history of continuous religious worship. With the production of a variety of products such as cotton and wheat, Shandong’s economy ranks first level among other provinces. It also features some precious metals, such as gold and diamonds. Besides, Shandong has one of the biggest sapphire deposits in the world. Some popular universities in Shandong contains: Shandong University, Ocean University of China and China University of Petroleum (Huadong)."