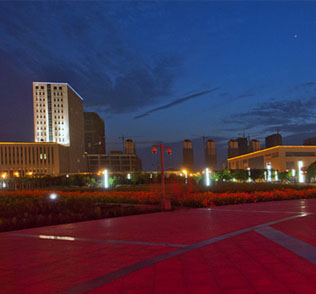 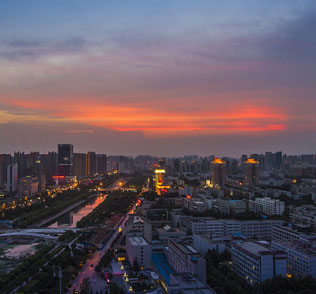 Zhengzhou is the capital of Henan Province located in east-central China. As a prefecture-level city, it also serves as the political, economic, technological, and educational centre of the province, as well as a major transportation hub for Central China. The city lies on the southern bank of the Yellow River, and is one of the Eight Great Ancient Capitals of China.

Greater Zhengzhou was named as one of the 13 emerging megacities or megalopolises in China in a July 2012 report by the Economist Intelligence Unit. 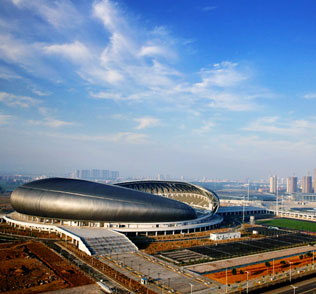 Jiaozuo (Chinese: 焦作; pinyin: Jiāozuò; Postal map spelling: Tsiaotso) is a prefecture-level city in northern Henan province, People's Republic of China. Sitting on the northern bank of the Yellow River, it borders the provincial capital of Zhengzhou to the south, Xinxiang to the east, Jiyuan to the west, Luoyang to the southwest, and the province of Shanxi to the north.

Its population was 3,540,101 at the 2010 census whom 1,301,732 live in the built-up area made of 4 urban districts (Jiefang, Shanyang, Zhongzhan and Macun) and Bo'ai County being urbanized. Jiaozuo enjoys a humid subtropical climate with continental climate influences,winters are cool and relatively dry while summers are hot and often rainy.average temperature ranges from 0.3 °C in January to 27.5 °C in July.Extremes exist from -22.4 °C to 43.6 °C °C,precipitation averages 659mm. 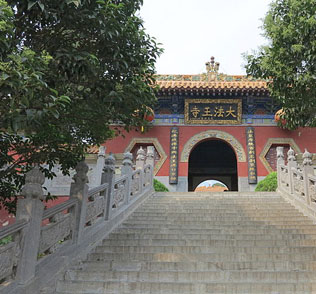 Dengfeng is located at the foot of the Mount Song, one of the most sacred mountains in China. The city is one of the most renowned spiritual centres of China, home to various religious institutions and temples, such as the Taoist Zhongyue Temple, the Buddhist Shaolin Temple, as well as the Confucian Songyang Academy, hence its poetic expression derived from Chinese literature as the spiritual "centre of heaven and earth". 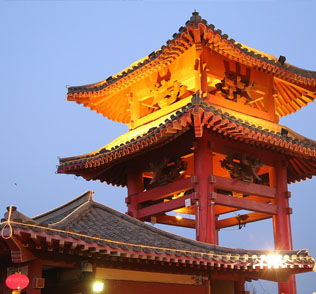 Kaifeng (simplified Chinese: 开封; traditional Chinese: 開封; pinyin: Kāifēng; Wade–Giles: K'aifeng), known previously by several names (see below), is a prefecture-level city in east-central Henan province, People's Republic of China. It was once the capital of the Northern Song Dynasty. 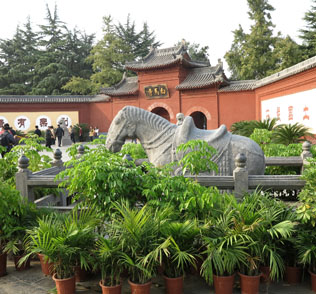 Luoyang (Chinese: 洛阳; pinyin: Luòyáng;; IPA: [lwɔ̂jɑ̌ŋ]) is a prefecture-level city in western Henan province of Central China. It borders the provincial capital of Zhengzhou to the east, Pingdingshan to the southeast, Nanyang to the south, Sanmenxia to the west, Jiyuan to the north, and Jiaozuo to the northeast. As of the final 2010 census, Luoyang had a population of 6,549,941 inhabitants with 1,857,003 people living in the built-up (or metro) area made of city's five urban districts, all of which except the Jili District not urbanized yet.

Situated on the central plain of China, Luoyang is one of the cradles of Chinese civilization, and is one of the Four Great Ancient Capitals of China. 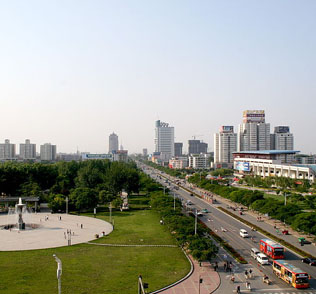 Xinxiang (simplified Chinese: 新乡; traditional Chinese: 新鄉; pinyin: Xīnxiāng; Postal map spelling: Sinsiang) is a prefecture-level city in northern Henan province, People's Republic of China. It borders the provincial capital of Zhengzhou to its southwest, Kaifeng to its southeast, Hebi and Anyang to its north, Jiaozuo to its west, and the provinces of Shanxi and Shandong to its northwest and east respectively.

Its population is 5,707,801 at the 2010 census of whom 902,731 are in the built-up area made of 3 out of 4 urban districts (Weibin, Hongqi and Muye). As the city is expanding very quickly, in a few years, Huixian and Weihui cities as well as Fengquan district and Xinxiang county will be added to the built-up area.

"Henan (Chinese: 河南; pinyin: Hénán) is a province located in the central part of China. Henan’s one-character abbreviation is ""豫"" (yù). The name of the province (河南) means ""south of the river"", but actually a quarter of the province lies north of the Yellow River, also known as the ""Huang He"". In the past two decades, Henan has seen rapid development in its economy, which has expanded at an even faster rate than the national average of 10%. The rapid growth has also transformed Henan from one of the poorest provinces to a central province. Some popular universities in Henan contains Zhengzhou University, Henan University and Henan Normal University."