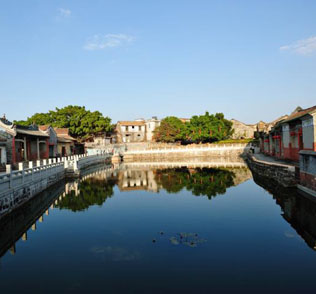 The 16,000 seat Dongguan Basketball Center will be one of the venues for the 2019 FIBA Basketball World Cup. The venue has already hosted the 2015 Sudirman Cup badminton tournament.

Dongguan Yulan Theater is one of China’s newest multipurpose performing arts venues. With its multi-layered exterior suggestive of an unfolding lotus petal, it has become a landmark in Dongguan city. The new cultural hub houses two theatres presenting a full schedule of performances, including Romeo and Juliet and the Chinese classic Butterfly Lovers. So far Dongguan has produced 7 original musicals by its own and made a roadshow of 60 performances in over 30 cities of China. 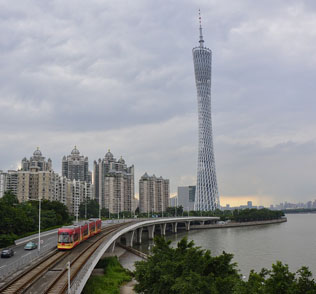 As the capital of Guangdong province in South China, Guangzhou, serves as an important national transportation hub and trading port. Located just south of the Tropic of Cancer,Guangzhou has a humid subtropical climate influenced by the East Asian monsoon.Summers are wet with high temperatures, high humidity and a high heat index. Winters are mild and comparatively dry.

Guangzhou is one of mainland China’s Leading commercial and manufacturing regions, its education level is very high, many international students apply for university which located in Guangzhou. 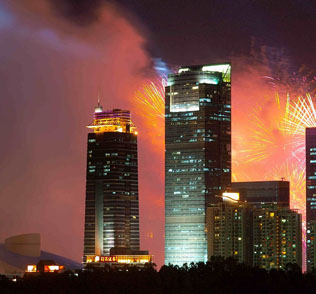 Shenzhen (Chinese: 深圳) is a major city in the south of Southern China’s Guangdong Province, situated immediately north of Hong Kong Special Administrative Region. The area became China’s first—and one of the most successful—Special Economic Zones (SEZs). It currently also holds sub-provincial administrative status, with powers slightly less than a province. According to a report published by Shenzhen Daily in 2012, Shenzhen has a population of approximately 15 million. It's one of the most built-up areas in the world and the so-called Pearl River Delta Mega City had more than 44.7 million inhabitants at the 2010 census spread over 9 municipalities (including Macao) and an area of 17,573 km2.

Shenzhen’s modern cityscape is the result of the vibrant economy made possible by rapid foreign investment since the institution of the policy of “reform and opening” establishment of the SEZ in late 1979, before which it was only a small village. Both Chinese citizens and foreign nationals have invested enormous amounts of money in the Shenzhen SEZ. More than US$30 billion in foreign investment has gone into both foreign-owned and joint ventures, at first mainly in manufacturing but more recently in the service industries as well. Shenzhen is now considered one of the fastest-growing cities in the world. 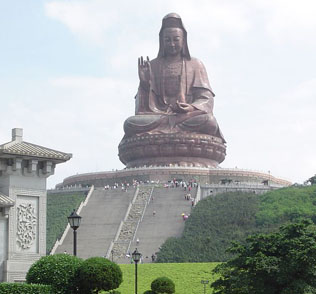 Foshan (Chinese: 佛山), is a prefecture-level city in central Guangdong province, People's Republic of China. The area under the city's jurisdiction is about 3,848.49 km2 (1,485.91 sq mi) and currently has a population of 7.2 million all urban. It's part of probably the most important built-up area in the world, the Pearl River Delta Mega City with more than 44,78 million inhabitants at the 2010 census spread on 9 municipalities (including Macao) and 17,573 km2.

The native dialect is the Foshan variant of Cantonese, but many areas of Foshan are now occupied by Mandarin-speaking migrants. 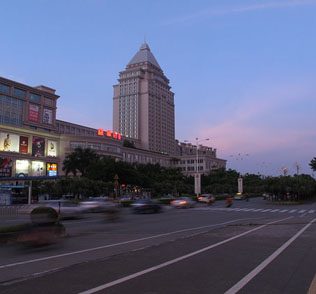 Jiangmen (Chinese: 江门) is a prefecture-level city in Guangdong province in southern China with a population of about 4.45 million in 2010. The 3 urban districts are now part of Guangzhou – Shenzhen conurbation, probably the most important built-up area in the world called the Pearl River Delta Mega City with more than 44,78 million inhabitants at the 2010 census spread on 9 municipalities (including Macao) and 17,573 km2. 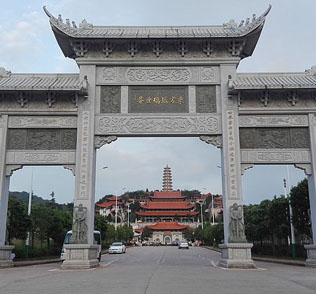 Meizhou is a prefecture-level city in eastern Guangdong province, People's Republic of China. It has an area of 15,864.51 km2 (6,125.32 sq mi), and a population of 4.33 million at the 2010 census. It comprises Meijiang District, Xingning City and six counties. Its built-up or metro area made up of 2 urban districts was home to 935,516 inhabitants at the 2010 census. Meizhou is honored with the titles of Hometown of Culture, Hometown of the Overseas Hakka Chinese and Hometown of Football. 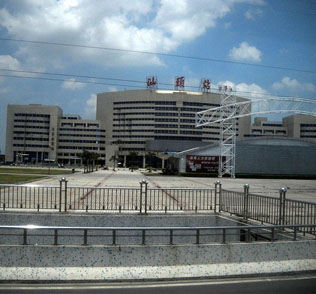 Shàntóu (Chinese: 汕头), also known as Swatow or Suátao, is a prefecture-level city on the eastern coast of Guangdong province, People's Republic of China, with a total population of 5,391,028 as of 2010 and an administrative area of 2,064 square kilometres (797 sq mi). Shantou has direct jurisdiction over six districts and one county, and the six urban districts of Shantou has a population of 5,330,764. With it and the surrounding cities of Jieyang and Chaozhou, the metropolitan region known as Chaoshan covers an area of 10,404 km2 (4,017 sq mi), and had a permanent population of 13,937,897 at the end of 2010. It's built up area spread of 11 districts was home to 11,635,577 inhabitants at the 2010 census.

Shantou, a city significant in 19th-century Chinese history as one of the treaty ports established for Western trade and contact, was one of the original Special Economic Zones of the People's Republic of China established in the 1980s, but did not blossom in the manner that cities such as Shenzhen, Xiamen and Zhuhai did. However, it remains eastern Guangdong's economic centre, and is home to Shantou University, a member of the Project 211 group. 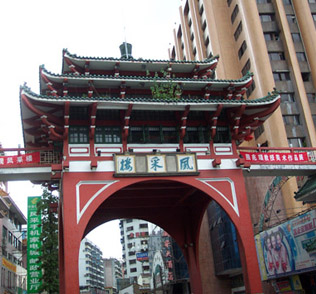 Shaoguan (Chinese: 韶关), is a prefecture-level city in the north of Guangdong province, People's Republic of China, bordering Hunan to the northwest and Jiangxi to the northeast. It is home to the mummified remains of the sixth Zen Buddhist patriarch Huineng. Its built-up or metro area made up of Zhenjiang and Wujiang urban districts was home to 688,229 inhabitants at the 2010 census, Qujiang district not being conurbated yet. 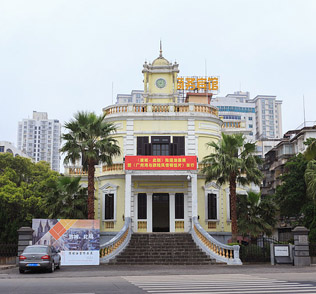 Its population was 6,994,832 inhabitants at the 2010 census. 1,611,868 live in the built-up area made of four urban districts: Chikan, Xiashan, Potou and Mazhang. In 2007, the city is named China's top ten livable cities by Chinese Cities Brand Value Report, which was released at 2007 Beijing Summit of China Cities Forum. 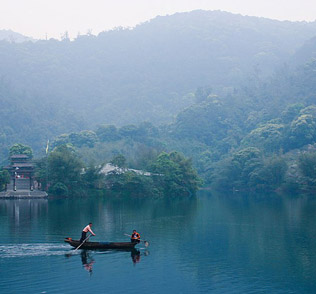 Zhàoqìng (Chinese: 肇庆) is a prefecture-level city of Guangdong province, People's Republic of China and is considered part of the Pearl River Delta region. It is well known for being a regional tourist hub, a medium-sized provincial "college town" as well as an up-and-coming manufacturing center. Residents from Guangzhou, Shenzhen and other nearby cities, as well as people from Hong Kong and Macau, are known to visit the city on weekend getaways and excursions. Its population was 3,918,467 at the 2010 census whom 1,232,462 lived in the built-up (or metro) area made of Duanzhou urban District and Gaoyao County largely being urbanized. Dinghu urban District is not yet conurbated. The main central city, excluding Seven Star Crags, is fairly flat, but thickly forested mountains lie just outside the city limits. Numerous rice paddies and aquaculture ponds are found on the outskirts of the city. 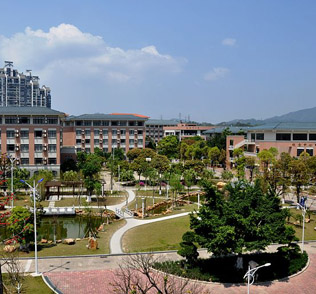 Zhuhai (Chinese: 珠海; pinyin: Zhūhǎi) is a prefecture-level city on the southern coast of Guangdong province in China. Located in the Pearl River Delta, Zhuhai borders Jiangmen to the northwest, Zhongshan to the north, and Macau to the south. Zhuhai was one of the original Special Economic Zones established in the 1980s. Zhuhai is also one of China's premier tourist destinations, being called the Chinese Riviera. The city's population is made up of mostly Mandarin speaking migrants. Its northern part made of Xiangzhou district is now part of the Guangzhou-Shenzhen built-up area, the biggest built-up area in the world with more than 44,478,513 inhabitants at the 2010 census encompassing the whole Shenzhen, Dongguan, Foshan, Zhongshan, Macao cities, main part of Guangzhou, and small parts of Jiangmen and Huizhou cities. According to the Chinese Academy of Social Sciences, Zhuhai is the most livable city in China.

"Guangdong (simplified Chinese: 广东; pinyin: Guǎngdōng) is a province on the South China Sea coast of the China. In English, Guangdong is also known as Canton or Kwangtung. In January 2005, Guangdong surpassed Henan and Sichuan to become the most populous province in China. Guangdong’s economy is pretty large and is comparable to that of many countries. Since 1989, Guangdong has been the largest province in China by GDP. Comparable to that of country subdivisions in dollar terms, Guangdong's GDP is even larger than that of all but 6 country subdivisions England, California, Texas, New York and Tokyo. Some famous universities in Guangdong contains: Sun Yat-Sen University, South China University of Technology and Jinan University."